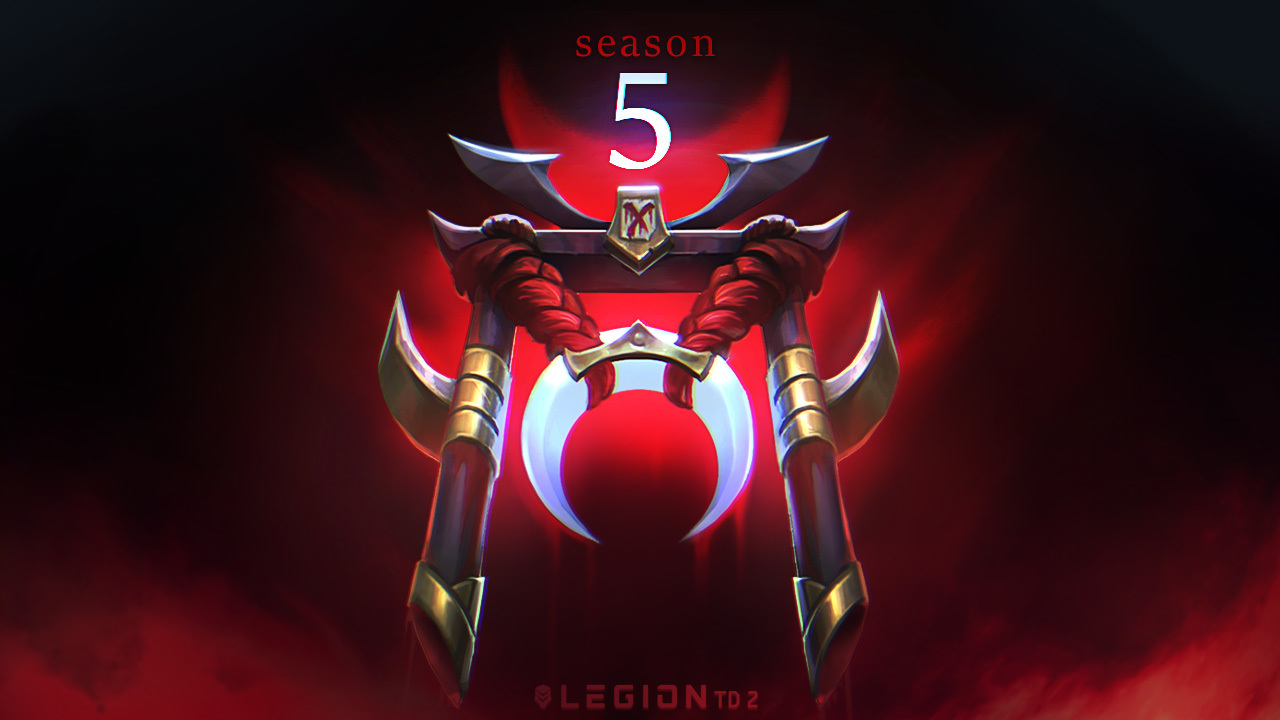 Season 4 has officially ended. Rewards will be distributed in the coming days, and ratings will be soft-reset. Ranked will be disabled on Friday, December 13 at 6pm PST and re-enabled on Monday, December 16 at 9am PST. During this time, we will have a Classic 4v4-only weekend. Season 5 begins as soon as patch v5.00 goes live.

Blood Price
Gains mana regen based on missing health. Every time it summons a unit, it loses 20% max hp (can kill itself).

Blood Price
Gains mana regen based on missing health. Every time it summons a unit, it loses 20% max hp (can kill itself).

With the release of Soul Gate and Hell Gate, Shrine is now a fully playable legion. Progress on legion 8 has already begun.

A lost civilization of long-standing traditions. Out of respect for the dead, they constructed a gate symbolically connecting the worlds of the living and the dead. One night, there appeared a crescent moon with an eerie reddish hue. At the gate, what was once a white rope warding off spirits was now stained dark red. The inhabitants of the Shrine began experiencing oddities, catching glimpses of the dead, and feeling an impending sense of doom. The realm of the dead grows larger every night, creeping and expanding its unholy dominion. The Shrine is no longer welcome to the living.

Economist
- Most gold from income. It’s all about that late-game scaling.

Kingsguard
- Most king upgrades. All hail the king.

Breaker
- Caused the most opponent leaks. The best defense is a good offense.

Tactician
- Most waves with no mythium sent. Keep them guessing.

- You can now view high-level statistics (rating, ranked win rate, etc.) from previous seasons, assuming the data was tracked then

Ready Button
- You can now click “ready” via a button instead of having to type the -ready command. You can also click the button again to toggle on/off whether you are ready or not.
- Wave 1 preparation time: 80 -> 90 seconds

In-game HUD
- Added text that shows a unit’s grid position when deploying fighters or selecting an existing fighter (in build phase only). This option can be toggled on in settings (default off).
- Added a loading spinner in the middle of the screen if you are lagging badly (out of sync with server)
- Lifebar styles are now unified (yours = green, enemy creatures = red, everything else = player colored)
- Mercenaries now show base unit tooltip (so players can understand, for example, that Dragon Turtle is more about its arcane tankiness than its magic dps)
- Fixed a case where the HUD would ping things instead of clicking them (AltHeld is now reset every couple seconds)
- A variety of other fixes & tweaks

Build Testing
- All -save/-load builds are now contained in player logs (previously was only the final wave’s builds). This means after any game, you can reload any player’s build from any wave for testing things like: would that build have leaked to brutes instead of fiends? would I have held if I put the bunk further forward? etc.

Tutorial
- Fixed a bug where gray borders/graphical artifacts would appear on the arrow graphic
**
Translations**
- Updated! Visit LegionTD2.com/translate if you’d like to help with translations. Any fixes or additions you make will show up in-game the following patch.

Takeover bots
- Fixed a bug where bots that take over for a disconnected player that was dual-building wouldn’t train workers or send mercenaries when dual building. They still won’t build (this is hard to implement), but at least they aren’t useless now.

This strategy involves one player only training workers, while the other player(s) build to cover. While it’s an interesting strategy, it’s too strong for how frustrating and chaotic it is. Our goal with this nerf is not to destroy the strategy, but rather to build a lever to nerf or buff it as needed.

There’s been a power creep for legion spells over the past year, so we’re nerfing the strongest ones:

Area of effect, in this context, is defined as any spell that hits an uncapped number of units

Market
- Removed from the game

With the introduction of so many more interesting spells, Market feels lackluster. Expect some new legion spells in early season 5.

Another season, another Ranger and Daphne rework. Stronger against waves 5, 15, and 20. Daphne now synergizes with many units and fast attackers.

Simplifying typing, filling a shortage of impact units, and decreasing the overabundance of pierce units

- Damage: 36 -> 38
- Now less likely to be instantly focused after reviving
- Shallow Grave now procs sequentially with Guardian Angel, instead of at the same time

- Damage: 112 -> 118
- Now less likely to be instantly focused after reviving
- Shallow Grave now procs sequentially with Guardian Angel, instead of at the same time

- Aerial Command: Does not stack -> Now stacks up to 2 times

Butcher and Head Chef are too strong early game and too strong with area of effect units like Banana Haven. We’re shifting power to synergy with single-target DPS units like Doppelganger, Kingpin, and Fenix, which is what Butcher was intended to be strong with.

Increasing the flexibility of an interesting ability and potentially opening up Grarl into Banana Bunk, Millennium, Lord of Death, Eggsack, Fire Lord, Orchid, or Alpha Male on wave 3

Priestess of the Abyss

Simplifying typing, filling a shortage of arcane units, and decreasing the overabundance of pierce units

Making these units easier to split tank with

- Detonation: Damage no longer reduced against flying units
- Fixed a bug where Detonation could not hit more than 20 units at once (no longer has a maximum)

Centaur’s identity as the anti-spam mercenary was overshadowed by the introduction of Witch. We’re shifting it to become a natural tank, which is currently lacking.